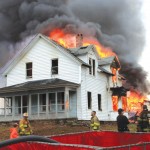 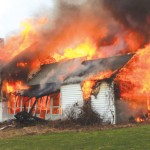 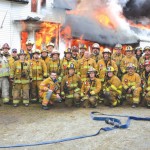 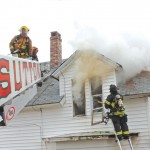 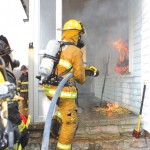 On April 2, 2016, the Sutton Fire Department hosted live burn training for their firefighters, and members of the neighboring Millbury, Grafton and Uxbridge Fire Departments. The century-old, 10-room farmhouse used, was located on a 133-acre parcel on Shaw Lane in the rural community of Sutton, and was originally owned by the Shaw family; S. Martin Shaw was the town’s first Fire Chief, and his son, Elliot R. Shaw, was a longtime firefighter.

According to Sutton Fire Chief Matt Belsito, the drill was over two years in the making, meeting state requirements, submitting the required paperwork and making preparatios to the farmhouse, but finally the day arrived. Belsito called on longtime friend and Auburn firefighter Steve Lemieux, who gathered a group of instructors from Central Massachusetts and beyond, and helped Chief Belsito prepare for the drill.

On the day of the drill, heavy rains were forecasted. Once the safety and accountability briefings were finished, the fires commenced, starting with small one-room fires and culminating with multiple-room fires on two floors.  In some instances, rescue mannequins were placed in the structure and these ‘missing firefighters’ had to be located and removed.  MedStar Ambulance, also participated in the drill, recovering the ‘downed firefighters,’ getting them out of their gear and breathing apparatus, and treating them. MedStar also provided vital sign monitoring of all firefighters taking part in the exercise. The Grafton  Fire Department Canteen was also on scene for the entire day, providing food, snacks, lunch and critical hydration.

The drill participants received vital fire experience under the watchful eyes of a veteran training staff.  Fire training of this caliber is seldom made available to small communities, and it was a huge opportunity to train under live fire conditions. Veterans got to sharpen their skills while newer firefighters gained valuable fire experience.

The day ended as the support crew lit a fire in the basement that was allowed to extend throughout the structure and eventually engulf it.  Three brush trucks were staged in the farm’s field to provide brand patrol downwind of the fully involved dwelling.

Attention to detail, good organization, and careful preparation led to a great day of training. 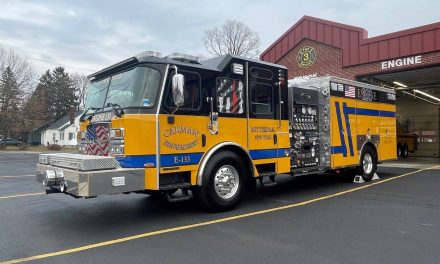 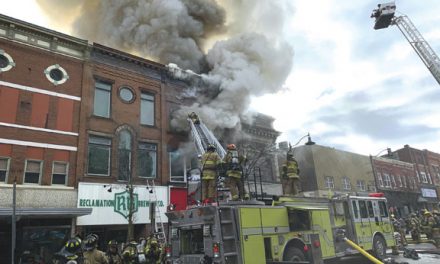