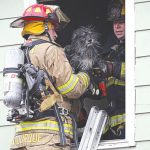 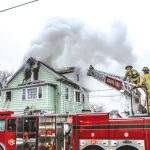 A fire in a first-floor bedroom quickly extended upwards in an occupied apartment residence on Hull Street in Seekonk (MA) on March 28, 2017. Heavy overlapping fire was showing from the Bravo side first-floor windows as companies arrived. Command requested mutual aid from East Providence (RI) and Rehoboth (MA) EMS to the scene along with coverage for this three-alarm fire. Companies were pulled from the dwelling as heavy fire began to vent out of the upper floor. Exterior handlines and master streams darkened down the fire so crews could return inside to expose hidden pockets of fire. Members found and removed five dogs over ground ladders while doing searches on the upper floors. One dog followed the occupants out as they fled to safety. A cat perished in the fire. 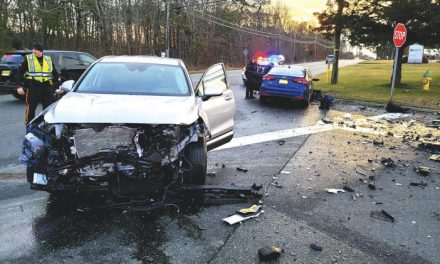