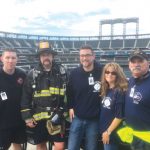 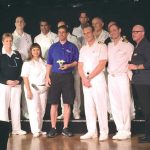 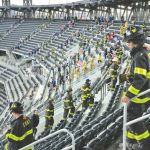 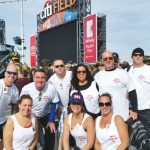 For the second consecutive year, hundreds of people descended on Citi Field in Queens, New York, to remember those firefighters who died in the line of duty. They came from 23 different states, numbered nearly 800, and when all was said and done, raised $150,000 to assist the surviving families and co-workers of fallen firefighters. Though the majority of the participants came from the first responder ranks and their families, there were also many members of the public present. Together they climbed 2,200 steps, the equivalent of the 110 stories of each of the Twin Towers at the World Trade Center.

“The National Stair Climb for Fallen Firefighters is a tremendous way to honor the selflessness and bravery of our community heroes. Every year, approximately 80 firefighters die in the line of duty and we want their families, friends and co-workers to know they and their firefighters will be remembered and cared for,” said Chief Ronald J. Siarnicki, Executive Director of the NFFF.

Though much attention at the event was dedicated to those killed at the Twin Towers on September 11, 2001, there were plenty of climbers paying tribute to firefighters who died in other tragedies. One such firefighter was Tim Gunther, 54, who died from cardiac-related issues after fighting a fatal fire on Church Street in Poughkeepsie, New York, on May 5, 2015. The Beekman, New York-resident was a 21-year veteran of the city fire department, and on October 29, 2016, his widow and son made the trip to Citi Field to pay their respects and remember their beloved husband and father.

“We’re walking in remembrance of him,” Christine Gunther, 51, said. “We want to help people like us that lost someone very near and dear to them.”

Upon completing the climb, all climbers ring a ceremonial bell and read out the name of the firefighter they are there in honor of. In a morning full of powerful moments, it was Ms. Gunther who touched all those present with her words.

“My husband, Tim Gunther, love of my life,” she proclaimed upon ringing the bell.

Climber Daniel Schultz, described it as the “the moment” of the morning.

“I swear the entire stadium went silent for a few seconds. Deafening silence, then applause,” said Mr. Schultz. “We all had tears in our eyes, for sure.”

Even people who were unable to attend did their part to pay tribute. Travis DeFluemere of Rockland County, New York, lost his father, a volunteer, in a fire in 1996. Unfortunately, the date of the climb overlapped with the DeFlumere family vacation onboard a cruise ship, so Mr. DeFlumere instead climbed the 2,200 steps onboard the vessel, cheered on by passengers and crew.

The second annual National Stair Climb was unquestionably both successful and moving, a fitting tribute to the nation’s fallen firefighters. Plans are already in the works for the 2017 National Stair Climb, and the NFFF and FDNY Counseling Services Unit are optimistic about an even more successful event next year. 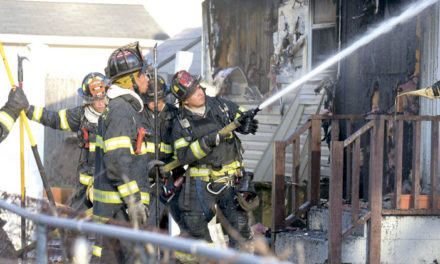