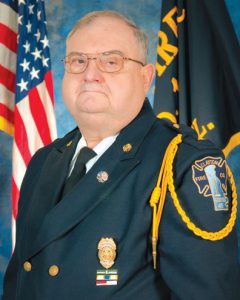 This issue will feature another great fire service person in the Delaware Fire Service that we all know very well. We know him from the Delaware State Fire Marshal’s Office and the Delaware Volunteer Firefighter’s Association — James L Cubbage, Jr., a 52-year member of the Clayton Fire Company.

Jim has a very long fire service and community involvement history. He said that when growing up in Clayton he did not remember not getting up when the fire siren sounded. He would get his dad’s coat in the wintertime and find his cigarettes for him in the summer. Jim noted to me, “I guess I was born into the fire service.”

His dad, James L. Cubbage, Sr., and his grandfather, James S. Donaway, Sr., were both life members of the Clayton Fire Company (CFC). His mom, Virginia, and grandmother, Ethel C. Donaway, were both charter and life members of the CFC Ladies Auxiliary. Jim followed in their footsteps when he joined the CFC on January 12, 1965, and he has held almost every elected or appointed fire line office or administrative office, serving as Chief in 73-74; and President from 1981 to 1984. He was awarded Fireman of the Year in 1967; made Life Member in 1981 and was made Chief Emeritus in 2010, becoming only the fourth member to achieve that title.

Jim graduated from John Bassett Moore High School in Smyrna in 1966. He didn’t stop his education with high school, however, but continued to further his education, earning a Associate’s Degree in Business Administration from Brandywine College of Widner University in 1976; and his Bachelor’s in Criminal Justice from Wilmington College in 1987, graduating Magna Cum Laude. In addition to earning these degrees while working full time, he also found time to attend the DSFS where he eventually became a Field Instructor. Not yet satisfied with learning as much as he could about the fire service, he attended and completed courses in Fire Arson Management at the National Fire Academy in Emmittsburg (MD), and also completed courses at the Federal Law Enforcement Training Center in Georgia.

Jim became a member of the Delaware State Fire Marshal’s Office (DSFMO) in September 1972, and retired after 30 years in 2002 as Assistant State Fire Marshal-Chief of Investigations. During his career with the DSFMO he investigated over 2000 fire scenes as a Deputy Fire Marshal; was Commander of the Major Incident Response Team; served as Chief Evidence Technician; PIO; Project Manager for DFIRS; and supervised anywhere between five and 14 staff members, to name a few of the things that Jim did during his 30 years with the DSFMO.

We also remember Jim as one of the Kent County Directors to DVFA from 1985 to 1998, going on to serve as President in 2001. When Jim finished his term as President he accepted a job as the DVFA Executive Secretary in 2002 serving in that capacity until 2010. Again in this position, Jim wore many hats to include; Governmental Affairs Representative in the Delaware General Assembly; he coordinated and maintained seven federal grants totaling over $1.5 million; represented the DVFA at various meetings with the governor, cabinet secretaries, various state agencies and other organizations and associations. Jim attended many other firefighter’s association meetings to report on what was happening in the Delaware Fire Service. He was part of a large contingency of DVFA members/officers and others up and down the state to attend various meetings. His traveling companion for many of these functions was none other than Steve Austin.

Jim wasn’t quite ready to retire from working for the state, so in January 2011 he took a job with the Delaware Emergency Management Agency as the NIMCET coordinator. He was responsible for the State of Delaware’s compliance with the requirements of NIMS and also training, staffing, logistics and deployment capabilities of the Delaware Type III IMT. Finally in June 2015 after 4-½ years with DEMA he decided to retire and spend some quality time at home with his lovely wife Nancy and their two cats. Mr. Cubbage, thank you for your 42-½ years of service to the residents of the State of Delaware.

You would think that with all the responsibilities that Jim had while working for the State of Delaware he wouldn’t have time for anything else. It seems, however, that a busy person always has time to add one or two more things to his plate to help out where needed.

Jim was also involved in many other fire service functions both in state and out. He is a life member of the IAFC; member of the CVVFA Emergency Responder Safety Institute; served as an Alternate to the NVFC; and a member of the Fire Marshals Association of America-FOP Lodge #3; just to name a few.

For over 40 years Jim is proud to be a member of the International Association of Arson Investigators.  He was very active in the IAAI, serving on numerous boards, committees and foundations during his 41 years of service. He received the George H. Parks Distinguished Service Award, and was awarded the Milestone Award for his 40 years of service.

I asked Jim what memorable events he remembered from his vast experience in the Delaware Fire Service and he said one was the Massey Moore Farm barn fire of July 20, 1969, because it was the same night that Neil Armstrong became the first man to walk on the moon. The other event that stood out in his mind, of course, was September 11, 2001. He was serving as President of the DVFA and it was the second day of the conference when the horrific news arrived. Governor Minner and Jim met throughout the day and put an EMS task force together to respond to New York. During the week, emotions and tension were very high and with the other events that happened at the Pentagon and in Pennsylvania, a decision was made to cancel the DVFA parade. This was a very trying time for our fire service, not only here in Delaware but across the nation.

The one question that I ask all of our subjects is: Did you have a mentor/s that inspired you to do what you did? Jim recalled that, without a doubt, the most influential person in his fire service career was William R. ‘Ace’ Carrow. He was a dedicated leader who knew how to mentor, advise, counsel and lead by example. Not only as Fire Chief in Clayton, but as President of the DVFA. He was not only Jim’s mentor, but was one of his best friends, as he was to several other Clayton gentlemen such as Jamie Turner, Dave Mast and Kevin Wilson.

In closing Jim stated that the younger generation needs to get, “Education, education and more education!” First of all a formal education. Get a degree, be it an AA or BA; secondly, strive to get NFPA Professional Qualifications and as much formal fire service training as available. Education is something that no one can take away from you.

I have known Mr. Cubbage for many years and have found him to be knowledgeable, understanding and forthright in his beliefs in the fire service.

Jim thanks for being my friend. It has been a privilege to write this article about you.

Jrs. Get a Taste of Real-World Firefighting 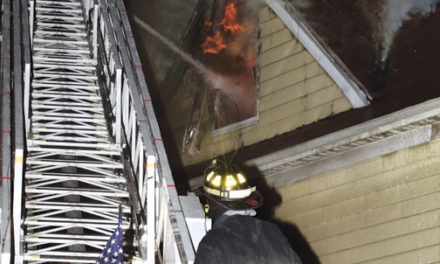