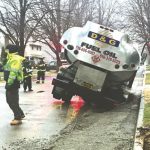 A delivery truck carrying 2900 gallons of home heating fuel inadvertently drove into a construction trench containing wet cement early Friday morning on Pine Street near Grove Street in Garden City. The driver was able to exit the vehicle without injury. There was no active leak but Nassau County Hazardous Materials units were called to the scene as a precautionary measure. A heavy tow was also requested to remove the truck from the trench which was part of a water main project in the area. Garden City firefighters and police were also on the scene.