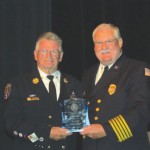 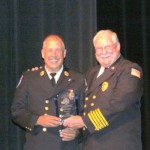 This year, the New York State Association of Fire Chiefs’ board of directors created a new award category, the Presidential Achievement Award. This award will not necessarily be presented every year, but is intended to recognize special achievement that benefits the fire service or demonstrates outstanding effort by a chief, past chief, officer, or firefighter that goes above and beyond the normal course of duty. The award will be presented solely upon the recommendation of the NYSAFC president.

The very first Presidential Achievement Awards were presented during the General Session of the NYSAFC 109th Annual Conference & FIRE 2015 Expo at the Turning Stone Resort in Verona, New York, to Ex-Chief Owen Magee of the Hicksville Fire Depart-ment and Chief Chris DePaoli of the Irvington Fire Department (Westchester County).

Owen Magee was honored in recognition of his dedicated service working toward the advancement of legislation for the benefit and safety of firefighters. For years Magee pursued legislation and changes to the law to ensure that a chief responding to a house fire would be aware that the roof of that home is constructed with truss construction. We all are very cognizant of the dangers of truss construction to a firefighter, but for years there was no good way to recognize that a house was built using that method of roof construction. Magee fought for legislation that was finally signed into law last year to require that a decal be placed on the exterior of all newly constructed homes indicating that it was built using truss construction. This achievement, combined with his many years of service to his own community, county, and the fire service of New York state, merit his being honored as the very first recipient of the NYSAFC Presidential Achievement Award.

Chris DePaoli was honored for demonstrating outstanding bravery in the face of adversity. While it is not unusual for any member of the fire service to demonstrate bravery in the line of duty at a fire or other emergency scene, the acts of DePaoli are unique and deserve special recognition. In April of this year, he observed a man stabbing a woman near a local Metro-North train station. After radioing for police to respond, without regard for his own safety DePaoli stopped the assailant and prevented him from continuing to injure the victim. After being joined by off-duty Police Officer Jim Egloff, the two cornered the assailant until uniformed officers arrived. NYSAFC is proud to recognize the bravery of DePaoli and honors him with the association Presidential Achievement Award. Pictured above are Presidential Achievement Award recipients ex-Chief Owen Magee and Chief Chris DePaoli with NYSAFC President 2014-2015 Don Corkery. 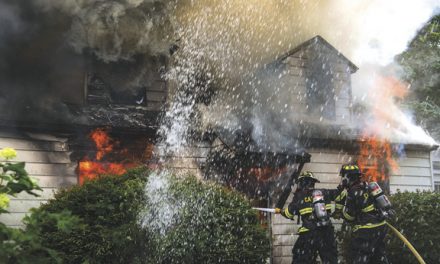