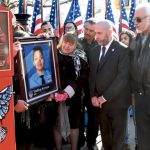 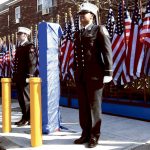 On March 17, 2019, a permanent memorial for FDNY EMT Yadira Arroyo was unveiled in a ceremony at the intersection of Watson Avenue and White Plains Road in the South Bronx where she senselessly lost her life at the hands of an emotionally disturbed person who ran her over with her own ambulance on March 16, 2017. Members of Yadira’s family, FDNY EMS and fire personnel, and the New York Police Department turned out to pay respects to honor her supreme sacrifice.