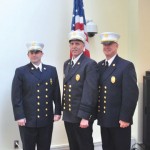 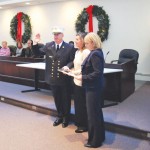 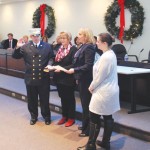 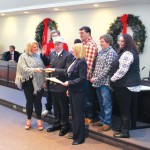 On January 1, 2016, at the Long Branch City Hall the new chiefs (top, left) of the department were sworn in. In attendance this year was Lt. Governor Kim Guadagno, as well as other city officials. Speeches were made by the new Chief Ron Guidetti and outgoing Chief Kevin Stout who was then sworn in as the newly elected 2nd Assistant Chief. Michael Marrow was sworn in as 1st Assistant. After the ceremony and speeches a special luncheon was served for all present. (Bottom, left): Chief of the Department Ron Guidetti and family. (Top, right): First Assistant Chief Michael Marrow with his mother, wife and daughter. (Bottom, right): Second Assistant Chief Kevin Scout and his wife.