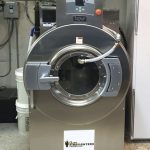 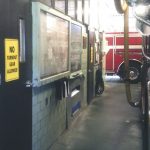 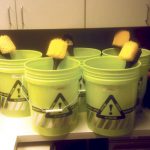 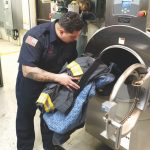 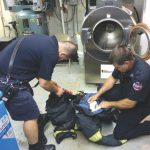 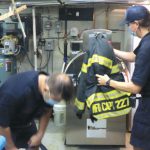 The Millburn Fire Department received a grant from the Leary Firefighters Foundation for two new PPE washing machines and one new PPE dryer. The Foundation was established in 2000 by actor Denis Leary in response to a tragic fire in Worcester, Massachusetts that claimed the lives of his cousin, a childhood friend, and four other brave firefighters.

Captain Brenner who applied for the grant on behalf of the Millburn Fire Department noted, “The grant being awarded to us was a huge step for the Millburn Fire Department to better protect our dedicated public servants from cancer and other toxins that collect on our gear. We were operating with an antiquated 20-year-old washing machine that was located at our Station 2. In order to wash our gear after a fire or other exposure, we had to transport the gear in vehicles, which further increased the spread of contamination and the potential for exposure.”

With the Leary’s Firefighters Foundation funding, it has now acquired UniMac industrial-level washers and dryers at both the Headquarters and Station 2.  These new machines are considered the marketplace benchmark with its Opti-spray and Fire-linc technologies.

Elisa Charters, a resident of Millburn/Short Hills, is a former Environmental Health and Safety specialist at the Port Authority of New York and New Jersey, and an NJIT alumna with advanced degrees in Environmental Science (Microbiology, Toxicology, Pollution Controls). She was excited to support Captain Brenner, Chief Echavarria and the Millburn Fire Department in their efforts to obtain grant funding and to access best-in-class industrial laundry equipment via CSCServiceWorks/Super Laundry LLC.

Elisa also happens to be a survivor of 9/11, who directly witnessed the heroism of the firefighters responding that tragic day, and of the heroes who responded to months of search and rescue efforts and the clean up.

“The stars really aligned when distributor CSCServiceWorks/Super Laundry LCC hired me per the recommendation of Raymond Fusco, Sr., a 75-year old veteran in the laundry business who serves the Fire Industry,” said Elisa, who also noted that there has since been considerable relief with Covid-19 CARES funding, which is directly applicable to the cleaning of PPEs. “This development along with the Cancer Presumption Bill, leaves no reason for New Jersey (or the region’s) fire departments, to be unable to access necessary funding for better laundry equipment to keep our State’s career and volunteer firefighters healthy and free of the known risks of lethal carcinogenic and bio-agents.

When circling back with Captain Brenner, he noted additional benefits that the department now realizes.  The locations where the new high-tech washing and drying equipment have been installed, also have separate entrances which allow Millburn personnel to bring soiled and contaminated gear and equipment directly to the machines without having to bring it through the station or creating unnecessary exposure.

The positive impact of the Leary Firefighters Foundation grant also now extends to benefit additional emergency responders. With the Covid-19 crisis, the Millburn Fire Department has been able to assist the Millburn Police Department and the Millburn-Short Hills First Aid Squad with washing their PPE.

For more information about how you can help the Leary Firefighter Foundation and how they can help you, visit their web site at https://leary firefighters.org/.