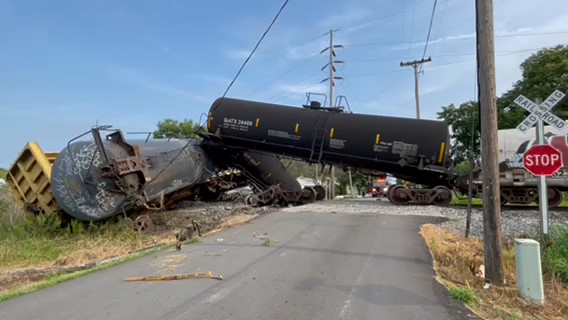 Crews work Train Derailment with possible hazardous materials leak
11794 Division St.
Fountaintown, IN
Dispatched at 8:08 AM
First Unit on scene – Shelby County Sheriff’s Deputy at 8:10 AM
Initial Size-up reported railroad car in the air on top of a tanker

5 homes to the North and 5 homes to the South were evacuated as a precaution at 8:46 AM
The impact disengaged a power pole and knocked several high power lines down – across the rail cars
Duke Energy Utilities Secured
447 homes and businesses without power due to power lines down – Estimated time for return of utilities is between 2:30 pm and 12:00 am today
No Hazardous Materials leak – confirmed by IFD HazMat Tac Team at 9:21 AM
Incident marked under control at 9:53 AM

Road closures could be in place up to 24 hours and include – SR 9, US 52, Railroad St and Division St.
The road closures are not affecting fire, EMS or other emergency services
Shelbyville and Shelby Eastern Schools were contacted to consider re-routing buses for after school drop offs
The preliminary plan by CSX includes disentangling the rail cars by 2 pm.
CSX is hoping to have their investigation complete, the rail repaired and back in service within 24/48 hours

The CSX investigation is ongoing – no idea as of yet, what caused the derailment
They are looking at several preliminary options based on the damage – including a possible failure of the wheels on the front car or a possible flaw in the track itself
The initial car failed at least 100 yards east of where it actually derailed. The impact of the cars behind it, pushed it 100 yards to the west and 20 feet off the track where it landed on its side.
This car was the primary leak and carrying used cooking oil
The wheels landed both to the left and right of the track – one 20 feet to the north, the other 40 feet to the south – into a field.
The impact completely displaced a 60 foot section of heavy timber railroad ties
One section of the metal rail split and embedded itself underneath one of the rail cars

The manifest shows 80 cars were part of the entire rail complement – traveling east to west
13 cars were part of the actual derailment – Catastrophic damage to all 13 cars
The train engineer told investigators that he felt a small jerk before the emergency lights activated inside his car.
Per CSX – when the emergency lights activate – the braking system activates – bringing all the non-affected rail cars, front and back, to a complete stop without incident
Leaking Product included used cooking oil and plastic pellets – nothing hazardous
Leaks were contained to area of origin.

Agencies involved in the response: 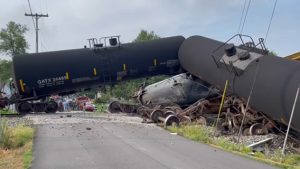 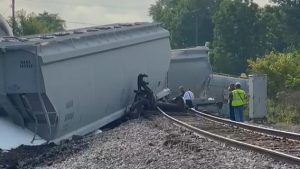 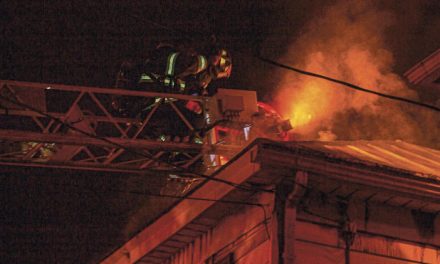 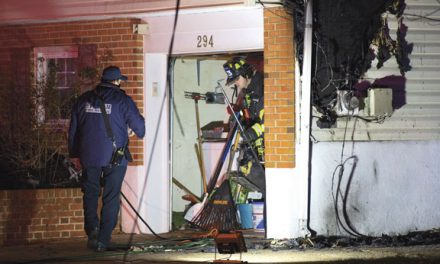 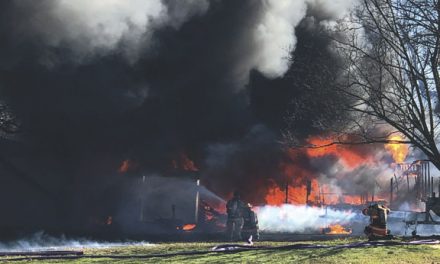