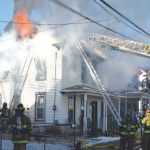 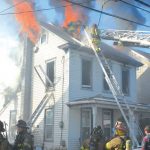 On February 5, 2018, Box 46-2, sent Hummelstown and area companies to the 100 block of North Duke Street for a residential fire. Company 46 (Hummelstown), Engines 47-1 (Union Deposit), 91-5 (Rutherford), Rescue 88 (Middletown), Tankers 59 (Lower Swatara), 47 (Union Deposit), and Air 48 (Hershey) were dispatched on the initial box. Chief 46 arrived to a fully involved house fire and requested the first-alarm assignment. Engine 48 and Truck 48 (Hershey), and Rescues 59 (Lower Swatara) and 48 (Hershey) responded as the working fire companies. Truck 34 (Paxtonia) and Air 41 (Bressler) also responded. Engine and Truck 46 took a position on side A, secured water, and stretched a line to the second floor in attempt to make a knock on the main body of fire. Engine 91-5 took a position in the rear and also stretched a line to side C. Heavy fire consumed the second floor rear and extended to the attic of the 2-1/2 story, occupied, single family dwelling. Interior crews reported the stairs from the second floor to the attic were burned through and companies could not access the attic from the interior. Several additional lines were stretched and the roof opened before the bulk of the fire could be knocked down and overhaul operations completed.