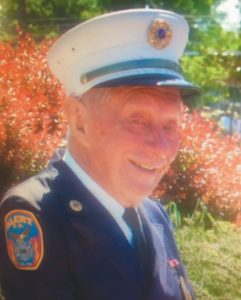 George B. Motchkavitz, who served in the Navy during WWII and then served his community for 70 years as a Great Neck Alert firefighter, chief, president and trustee, of the fire company, died, December 7, 2016, at the age of 89.

George was the son of John Motchkavitz, who had fled Poland in 1906 at 16-years old to escape being forced into the Russian army. One of 13 children, George was born on May 27, 1927, in the house his father built in the old village of Great Neck that continues to be the home and gathering place for the family. He would raise his own family in that house with his loving wife Dorothy.

After the war, George, Lenny and brother-in-law John Pothlanski founded the family business, M & P Plumbing and Heating, in Great Neck. George retired from the business after 50 years. His devotion to the Great Neck community was grounded in his 70 years of service to the Great Neck Alert Fire Company where he attained the rank of Chief and President, as well as serving for many years on the Board of Trustees. He was the Alert Company chief from 1963-1966 and also served as President of the 8th Battalion Past Chiefs Association. George was a man dedicated to his family, friends, customers and community. According to son John, “he lived his life helping others and set a great example for future generations of his family to follow.”

In addition to his extensive community service, George found peace in simple things such as growing a large vegetable garden, fishing and splitting wood. Throughout his early life, he helped his father tend a large garden and take care of the cows, chickens and ducks that the family kept behind their house in Great Neck.

George is survived by his wife of 64 years, Dorothy who lives in the same house George’s father built so many years ago. He is also survived by sons John (Dawn) and George of Great Neck and daughter Diane; brothers Lenny of Great Neck and Florida, and Ronnie, of Florida; grandchildren Garrett, Ryan and Julia; and a great-granddaughter Loretta. 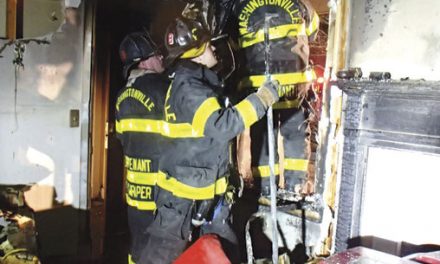