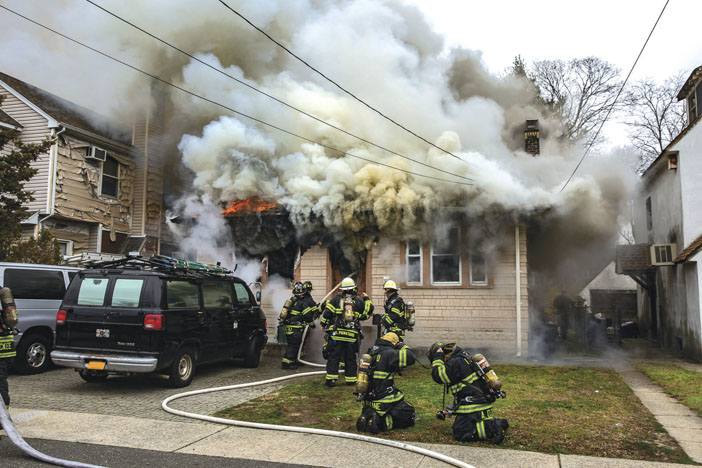 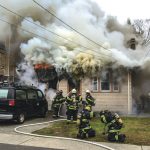 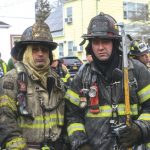 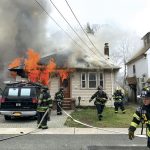 Lynbrook’s Fire Chief and an East Rockaway firefighter saved a man who had barricaded himself in his burning home but not before he assaulted the chief who had forced his way into the fire to save him in East Rockaway.

The East Rockaway Fire Department was notified of a house fire on Elbert Place shortly after noon. First arriving firefighters found heavy fire in the front of the home with neighbors saying someone was trapped inside the burning home.

Lynbrook Fire Chief Nick Pearsall who had seen the smoke after completing a fire call in Lynbrook responded. With the fire blowing out the front door and windows of the home, the chief went to a rear door and forced it open. Without the protection of a hose line he entered and began a search for the victim in heavy smoke and intense heat and fire.

Chief Pearsall located the unconscious victim on the floor in the front living room and proceeded to drag the victim back through the dining room and kitchen to the rear door. When they were close to the back door the victim suddenly regained consciousness and fought with the chief. He kicked the Chief’s helmet and facepiece, knocking off the Chief’s breathing mask. The man ran back into the heavy smoke and fire.

Just then East Rockaway Firefighter James Monaco came in the rear door and met up with Chief Pearsall. Monaco said the victim did not pass him in the heavy smoke, so the two began to search again inside the home for the man. They found the victim in the basement, where even more fire was found. Chief Pearsall and Firefighter Monaco working together were able to drag the man back upstairs and out the back door where they passed the man to Nassau County Police who were waiting outside.

The victim was in serious condition at a local hospital. Firefighters from all the surrounding communities responded to the scene to assist in fighting the blaze. The fire was under investigation by the Nassau County Fire Marshalls Office and the Nassau County Police Arson Squad. The man has been charged with arson and assaulting the chief.

Scenes from the 2018 Mega Show