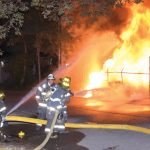 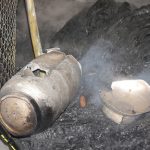 The Copiague Fire Department was alerted for a fire in the vicinity of Tobay Printing on Marconi Boulevard on October 1, 2017. Engine 1-3-9 arrived first to find a large fire to the rear of a building on Akron Street. As firefighters began operations, several large propane tanks exploded. With additional units arriving on scene, entry was made into the building where the fire was being contained by the sprinkler system. With multiple handlines the fire was knocked down in about 45 minutes with no reported injuries. Mutual aid came from Amityville, North Amityville, Lindenhurst and North Lindenhurst