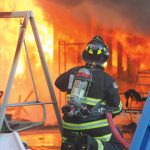 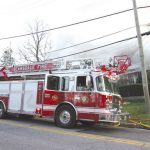 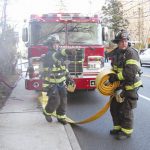 On December 4, 2016, Scarsdale firefighters responded to numerous calls for a house fire on Boulevard near White Plains Post Road. Upon arrival, companies encountered heavy fire from the rear of the house and a burn victim out front. As members entered the home with reports of a person trapped, they ran into heavy debris and a doctor’s home office. After an interior attack of over an hour, companies were withdrawn as floors collapsed and the fire burned through the roof. A well-known local doctor perished in the fire and his body was not recovered for nearly 24 hours. Heavy equipment was required to clear debris and access parts of the house to extinguish pockets of fire and locate the deceased. The nearest fire company had been placed out of service just two weeks before the fire. Mutual aid responded to the fire from Eastchester, Greenville, Hartsdale, Fairview, New Rochelle and White Plains.