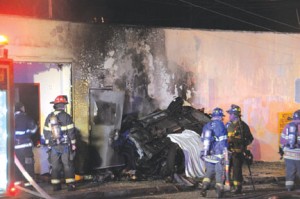 Early on April 12, 2015, the Baldwin Fire Department was dispatched to Kings Parkway and Grand Avenue for an MVA with overturn and reported car fire. Nassau County Police were on the scene and confirmed the fire. First arriving units encountered a single-car into the building and a working fire that extended into the cockloft. Engine 203  stretched two lines, one to the car and the other into the building. The crew from Ladder 207 vented and searched the building. The fire in the building was quickly extinguished as was the car fire. The driver of the car was pronounced dead at the scene. The Hempstead Fire Department was requested to the scene for a FAST unit. Chief of Department Bendel was in charge and the cause of the accident was investigated by Nassau County Police. 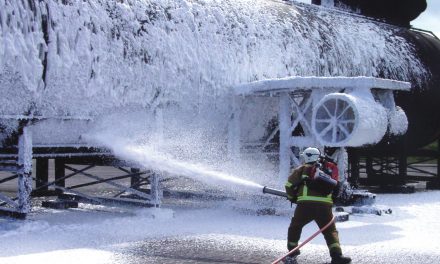 PORTA-CAFS INCREASING THE EFFECTIVENESS AND SAFETY OF FIREFIGHTERS