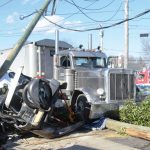 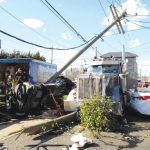 The Farmingdale Fire Department and Nassau County Police responded to an accident at Fulton and Main Streets on March 8, 2017. A tractor-trailer and a small SUV collided sending the vehicles into a utility pole and two other vehicles. The SUV overturned onto its side and was heavily damaged, with the SUV passenger, who succumbed to injuries, heavily pinned. The driver of the SUV and another person were taken to Nassau University Medical Center. The East Farmingdale Fire Company was also requested to the scene with an additional Heavy Rescue.