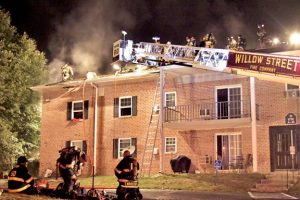 On September 30, 2016, the Lancaster Township Fire Department was dispatched for a two-story apartment building fire at Village of Lancaster Green Apartments on Judie Lane in Lancaster Township. A resident called building maintenance to explain there was excessive heat in the master bedroom. As the resident met the building maintenance representative, they observed smoke coming from the roof. Arriving firefighters found smoke venting from a gable vent over apartments A thru H. The fire was beneath the roof and above the ceilings in an open space extending the length of the building. Firefighters had no access to the attic and were forced to cut their way into the attic thru the roof with chainsaws. Two ladder towers were deployed for firefighters to access the roof. A third tiller ladder was used to access the gable end. Once inside the attic, firefighters observed an electric wire arcing from the end wall, which had filled the entire attic area with smoke from burning insulation. Firefighters removed the burnt insulation with barn shovels and vented the smoke. A family of five were displaced. The family was placed in the care of the American Red Cross. Assisting were: Mountville, Lafayette, Lancaster City, Blue Rock, Willow Street, Manheim Twp., Rohrerstown, West Willow, Upper Leacock, East Petersburg Fire Co. and Lancaster EMS. 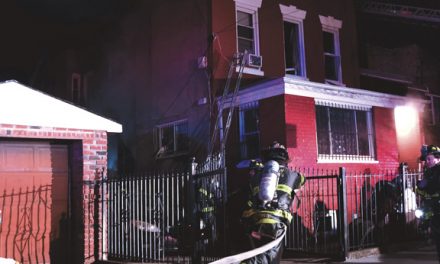