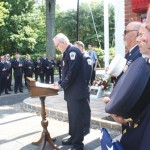 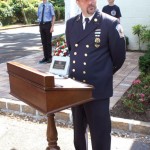 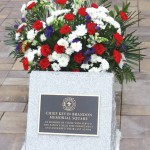 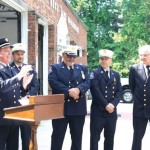 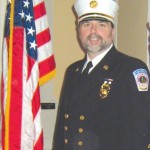 In a tribute to its fallen members, the Eaton’s Neck Fire Department has constructed a new flagpole and memorial garden at the firehouse, which was dedicated at a special ceremony Sunday, June 26, 2013. At the center of the monument at the base of the flagpole is a memorial stone designating the site as the Chief Kevin J. Brandon Memorial Square. “In memory of those who served the Eaton’s Neck Fire Department and answered their last alarm,” is printed on a plaque affixed to the stone. The memorial is surfaced in blocks, many of which are engraved with a name of firemen who passed away while they were members of the department.

Chief Brandon passed away November 13, 2012, from cancer during his term as chief. He is survived by wife Christine and four children, Julian, 14, Ryan, 16, Collen and Emily, all of whom attended the ceremony. After welcoming remarks by Chief of Department Paul Boronow and an invocation by Chaplain Al Zelenka, Julian and Ryan, both Northport High School students and members of the Northport Fire Department Smokeaters, raised the flag then lowered it to half-mast during the service.

The ceremony concluded with Chief Boronow, First Assistant Chief Richard Rizzuti and Second Assistant Chief Steve Zulawski taking turns reading the names of each of the firefighters names on a stone in the memorial while a bagpipe played “Amazing Grace.” The Brandon boys then raised the flag back to full mast.

– Fire News story and photos by David Ambro, courtesy of The Observer 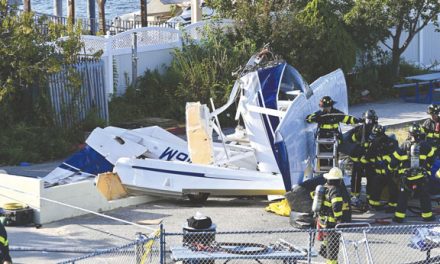 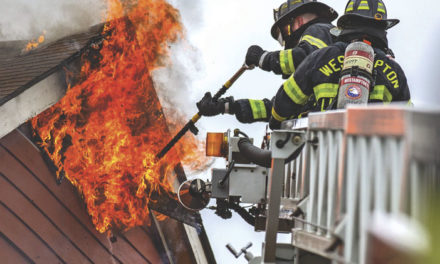