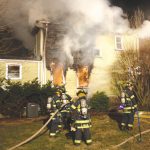 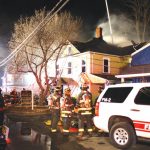 On February 3, 2017, Mount Olive fire units were dispatched for a report of smoke coming from a building on Park Place in the Flanders section of the township. Flanders Car 90 arrived and reported heavy fire from the first and second floors of an old balloon frame building and requested a second alarm. Engine 95 arrived and stretched a line into the first floor, but were soon forced out due to a floor collapse on the first and second floors. Crews went to a defensive attack with Budd Lake’s Squad 56 set up on the bravo side and several handlines, along with a tower ladder and a deck gun, in operation. Crews re-entered and were able to get the fire under control within an hour. One firefighter was taken to the hospital with a shoulder injury. Chester, Netcong and Hackettstown assisted.