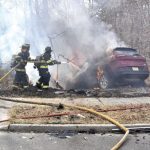 The volunteer fire companies of Cardiff and Bargaintown responded to West Jersey and Tremont Avenues in March 2019, for an MVA with fire. The crash involved two vehicles; one came to rest in the woods and caught fire, the second travelled about 250 feet west before it came to a stop. Cardiff Chief Gil Zonge was advised by dispatch that one of the vehicles was on fire and catching the woods on fire. Firefighters stretched two one-inch lines, one onto the vehicle, the second to contain the woods fire. After the woods fire was extinguished, the second line was used to assist in the extinguishment of the vehicle fire and firefighters then cut the battery on the second vehicle. The occupants of the vehicle that was struck and caught fire were able to exit the vehicle, but the occupants of the second vehicle were treated and transported by EHT EMS to the local hospital. 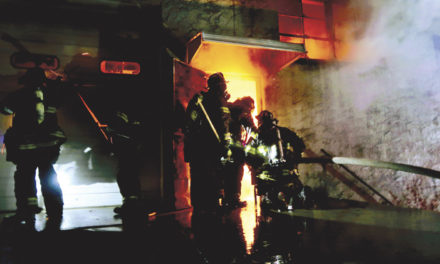