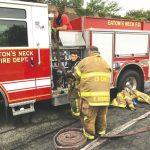 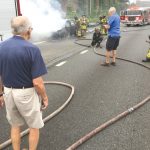 At approximately 0800 on September 20, 2017, Eaton’s Neck Fire Department’s Engine 7 was traveling east on the Long Island Expressway between exits 60 and 61 in Ronkonkoma. The apparatus was en route to the Suffolk County Fire Academy in Yaphank for routine pump testing.

With traffic backing up, a car fire was observed on the right side of the road. With the car’s engine compartment ablaze and heavy, black smoke obscuring the right hand lanes of the roadway, police officers from the Suffolk County Police Department, who were already on scene and had the roadway partially blocked, motioned the apparatus over to the side of the road.

The Eaton’s Neck crew began to attack the fire using water from the onboard booster tank.

On the nozzle and stretching the attack line was Firefighter Richard Baer, 81, with ex-Chief and Engineering Officer Arthur Angst, 81, operating the pump. Providing backup was the baby of the crew, Fire Police Lieutenant Richard Deters, 77.

With the fire knocked down, the Ronkonkoma Fire Department arrived shortly thereafter and overhauled the vehicle. Ronkonkoma crews graciously repacked the hose on Engine 7, which continued to the Fire Academy. No injuries were reported. (See story on page 24.) 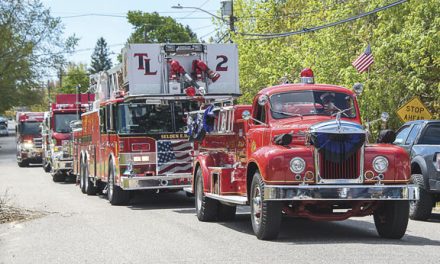