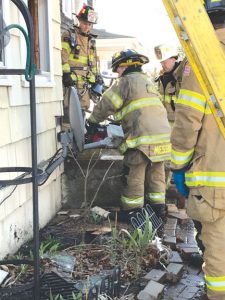 On March 3, 2017, the Bay Shore Fire Department was activated for a structure fire on Second Avenue. Units arrived to fire on the #1 side of the house which had entered the wall and burned into the house. The fire was brought under control a short time later with fire damage limited to the one area on the first floor. Mutual aid came from Islip and West Islip (stand-by). The Red Cross responded to attend to the seven displaced residents.