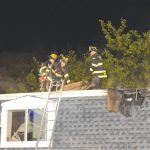 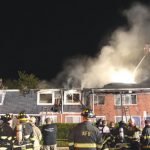 On September 19, 2016, the North Amityville Fire Company was alerted for a fire at the Amityville Square Apartments on Great Neck Road. First arriving units encountered heavy fire showing from a unit on the second floor, which was extending into a neighboring unit and into the cockloft. Chief of Department Harley requested multiple mutual aid to the scene as his units arrived. Engine 1-7-1 put multiple lines in operation while the crews from Amityville, Farmingdale, East Farmingdale, Copiague, and the Wyandanch-Wheatley Heights rehab unit, arrived. The fire was brought under control in about an hour with two units destroyed and several others damaged, displacing six families. The Red Cross was on scene to help the displaced families. There were no reported injuries and the cause of the fire was under investigation.