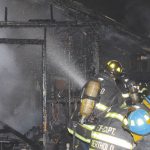 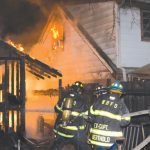 The West Babylon Fire Department was called to a house fire on 10th Avenue on November 27, 2016. First Assistant Chief Schumann arrived to find a large shed fully involved, which had spread to the second floor apartment of the Herzel Boulevard home and damaged sheds and fences in several yards. Engines 1-9-2 and 1-9-6 were on scene almost immediately as the fire was located across from their quarters. Engine 1-9-8, Ladder 1-94 and Heavy Rescue 1-9-15 arrived and crews attacked the fires from both streets. It took about 40 minutes to get all the fires under control with the original shed completely destroyed and the apartment heavily damaged. One person from the original house suffered burns and was taken to Nassau University Medical Center; another person and a firefighter were taken to Good Samaritan Hospital. Mutual aid came from  East Farmingdale, North Babylon and Wyandanch-Wheatley Heights Ambulance responded; West Islip stood by.