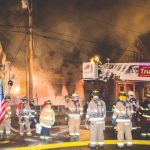 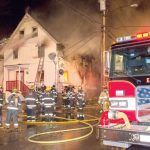 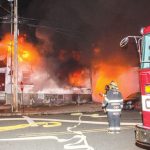 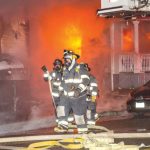 On the evening of March 10, 2017, the Ansonia (CT) Fire Department was dispatched to the corner of Fourth and Liberty Streets for a structure fire. First units found a heavily involved 2-1/2 story wood frame quickly exposing to another 2-1/2 story wood frame on Fourth Street, due to the heavy fire and wind conditions. Firefighters remained on scene throughout the night in frigid temps. No residents were reported injured, but there were reports that two dogs had perished. Approximately 22 people from five families were displaced. Mutual aid came from Derby and Seymour.
– Fire News photos by Keith Muratori and Kevin Czarzasty